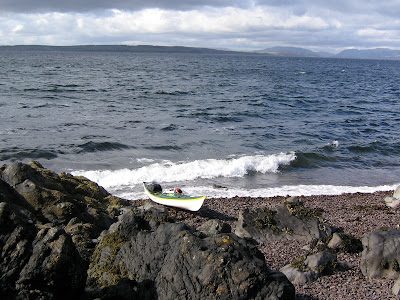 this was a trip i went on last spring. the plan was to paddle from portencross out past little cumbrae over to bute then circumnavigate round bute then back to portencross. i was wanting to put a kayak to the test and what a test i got!!!! the kayak i was paddling was a NDK Explorer hired from kari-tec. this was a fantastic stable very able kayak. if it was not for this kayak i think i would have never managed the conditions.
well that was the plan! but as a great poet said "the best laid schemes o mice an men gang aft agley "
mother nature had other plans for me. the wind and waves started to increase as i began my trip. the waves picked up more than i would have liked as i made my way across to little cumbrea. I quickly realised that the conditions were way more than than my abilities. i made a mad dash to long bay on the west side of little cumbrae and set up camp to wait out the wind.
Posted by Alan Wilson at 7:20 pm